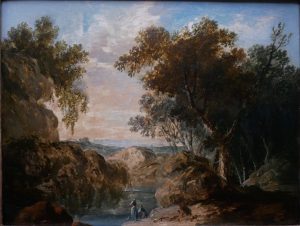 River scene with Fisherfolk on a River Bank.  Pier Paolo Anesi was an Italian  self taught artist who painted and engraved landscapes in and around Rome.

In 1761 he  painted in collaboration with Antonio Bichierai and Nicolo Lapiccola the frescos in the Villa Albani, Rome, which he signed. They sadly only bought a short term fame as he died shortly after finishing them.

Anesi landscapes were mostly of the countryside around Rome and normally featured Rome and the Tiber.  His style influenced a great many Italian painters including Francesco Zuccarelli who was Anesi’s pupil.

Anesi's engravings are of similar scenes as his oils. Along with the The Roman School of painting he developed an artistic vision of classical landscape which established a formula used by artists up to present day. Richard Wilson was greatly influenced by Anesi, although he distilled the ethics of the style.

This panel, River scene with Fisherfolk on a River Bank by Pier Paolo Anesi is remarkably fresh for its age. The paintwork is executed with great stokes of clever precision. The figures in his finished landscapes lack the impromptu feel of this sketch, they are not laboured in any way. The palette is traduced with creams and pale blues.