The Avenue, Kelty, Fife and The Firth of Forth and the Bass Rock beyond. watercolour, heightened with body colour ,signed and dated 1876. 11ins x 13ins

Samuel Bough, a  talented Scottish water colourist and oil painter. who exhibited at the RSA. He painted landscape all around Great Britain but his favourite location was on the banks and surrounding country side of the Firth of Forth and Fifeshire.

Samuel Bough was apprenticed to Thomas Allom as an engraver in London in 1840, he however soon returned to Scotland and then subsequently took up scene painting for the Theatre Royal, Manchester. Bough also worked in Glasgow for the Princess Theatre and the Adelphi Theatre Edinburgh.

In 1849 Samuel Bough took up full time landscape painting. Samuel Bough was elected ARSA in 1856 and RSA in 1875. A talented painter and certainly the best of his time in Scotland. The fact that he only became a full RSA so late in his life must have been due to jealousy from the other members. He had considerable success commercially and was a popular man. Although painting in the Victorian era . Bough had an individual style that took him away from the standard Victorian style and he added an extra dimension to his landscapes by capturing the local views and its poeple at work in a charming way.

Scottish artists like Samuel Bough earned a good living during their careers. Samuel Bough was no exception, charging high prices for his works. His oils were his highest earners and most admired. His work is hung  in many Museums in Scotland and England including paintings the Victoria and Albert, British Museum, Aberdeen,Dundee, Fitzwilliam,Glasgow, Greenock, Kirklady, Manchester, Paisley, National Gallery Scotland and Ulster.

in 1905 a biography of Samuel Bough was published in the Art journal. Samuel Bough is one of my favourite painters.

Samuel Bough loved painting in this area of Fifeshire. Painting the banks of the Forth and its people at work. In the distance highlighted against the background is the Bass Rock. The figures , probably returning from harvest, are caught in the dappled sunlight of the avenue of trees. Harvesting scenes were one of Bough favourite subjects, using creamy golden yellows to for the stooks and harvested fields. ON VIEW AT J BEAZORS ANTIQUES,20 REGENT ST, CAMBRIDGE 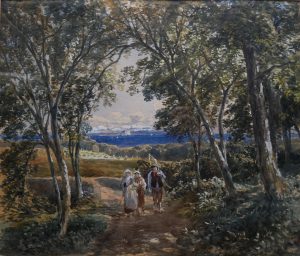